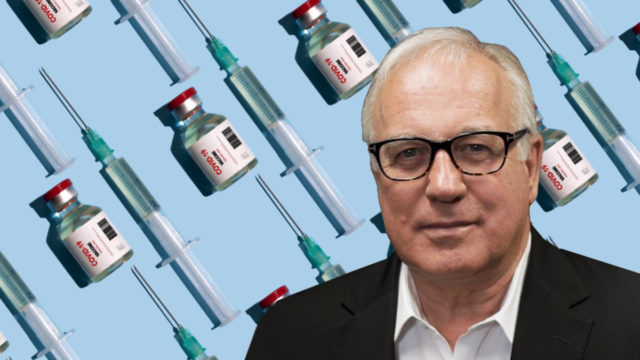 We can no longer avoid a debate about making COVID-19 vaccination compulsory.

At the very least it should be required for healthcare workers, and perhaps for anyone mingling in crowds – going to the football, concerts or the theatre, pubs, cafes and restaurants and, of course, travelling.

The government should explain to those who decide not to be vaccinated that it’s also a decision to stay home and not see anyone.

Desperate businesses in the tourism industry and in Victoria this week are calling for mandatory vaccination, and who can blame them?

Full general compulsion, as with seatbelts and super, is probably out of the question – none of the many other compulsory things in society get injected into our arms.

But for a start the government should stop saying it’s making vaccines available for “those who want it”.

The message needs to be much tougher than that.

Workers in aged care, quarantine and health care generally must be fully vaccinated or find another job, because 17 per cent of people with the virus have no symptoms, and even those who do develop symptoms take a few days to know they’re sick.

The world will eventually have to have a system of passports for those who have been vaccinated, so that airlines and airports, and venue operators who have to deal with crowds, can decide who to let in.

Public liability insurance companies will probably insist on that anyway.

More broadly, the chaotic vaccine spin that’s going on in Australia needs to be replaced with calm, honest transparency.

We had high hopes for Commodore Eric Young, who was brought, blinking, out of the Navy and into the public gaze five weeks ago by the Health Minister Greg Hunt and named as “Operations Co-ordinator from the Vaccine Operations Centre”.

Yes! Get the military involved.

Mr Hunt didn’t say the Commodore is now in charge of Australia’s vaccine rollout, although that was implied and widely assumed at the time, but he did say Commodore Young served at sea “on a number of occasions”, including the Middle East, had been the Chief of Staff to Navy, and had also been decorated, which could be viewed on the Commodore’s ample chest.

A decorated sailor who has actually been to sea is clearly the right man to be running the most crucial and difficult vaccination program in Australian history.

Except it has been pretty clear in every press conference and media appearance since then that he’s not.

The man in charge of the vaccine rollout is Greg Hunt.

Commodore Young is merely operations co-ordinator, as well as the man in charge of burying journalists in data at press conferences, which he does with extraordinary precision and recollection.

His ability to rattle off statistics without an autocue, while staring straight ahead, is nothing short of miraculous.

Anyway, if Greg Hunt really is in charge of Australia’s vaccine rollout, as he presents publicly, and it isn’t any of the various Health Department lackeys who take turns at the mic, then he needs to be much clearer, more transparent and more honest about what he’s up to.

If not, give the job to someone else – not a politician – and step to the back of the press conference podium.

Is the aim herd immunity? If so, by when? And what will that mean for the economy? And tell us how it’s to be achieved, not simply how many people got vaccinated yesterday.

Most experts I’ve spoken to, and I’ve spoken to a few, say we need to vaccinate at least 75 per cent of the population for herd immunity but we are currently heading for a maximum of about 60 per cent.

The highest estimation comes from Professor Marylouise McLaws of UNSW, who told me this week it will take 83.5 per cent of the population to be vaccinated.

That’s partly because of how rapidly the virus is now mutating and spreading, and also because 20 per cent of the population are children, who are not being vaccinated because they don’t display symptoms, and about 20 per cent are “hesitant” (technical term, which doesn’t mean they’re anti-vaxxers – it means they’re worried, and need to be persuaded, or they live in the bush and can’t get to a doctor easily).

If those people can’t be persuaded, or helped, and if there is no plan to vaccinate at least half the kids, say those over 12 – who can still spread COVID-19 – then Australia is looking at closed borders, 14-day quarantines and frequent state-wide lockdowns for at least three years.

So, what’s the official word on the requirement for herd immunity? And the plan to get to it, whether it’s 75 or 83.5 per cent? Hope?

Supply has been, and still is, a problem.

CSL’s factory at Clayton in Melbourne is chugging out a million doses of the AstraZeneca vaccine per week now, which is not enough.

CSL says it’s working on increasing the output, but just a little, not dramatically.

As for distribution, the most recent weekly update from the Vaccine Operations Centre said that 510,000 doses had been administered in the previous week.

To reach 75 per cent full vaccination, that is with two doses each, 38 million doses would have to be injected into 19 million arms.

At the current rate it would take 74 weeks, or about 18 months.

The rate can clearly be increased, especially when more Pfizer vaccines are available and the 50 million Novavax doses on order get approved, but it’s still probably 12 months off.

Professor McLaws says that to reach herd immunity by Christmas this year, the rate would have to step up to 150,000 per day – almost double what it is now.

All of this should be disclosed.

Everyone in the loop, from Greg Hunt and the chief medical officer down, would know exactly when herd immunity is likely to be achieved in Australia and what life will be like until then, and they should share this with the rest of us so we can make plans … especially the businesses affected.

As for persuading those who are “hesitant”, the UK and US have been trying advertising campaigns with Elton John and Dolly Parton, which are funny and nice, and might work.

We should try that too – with Jimmy Barnes and Kylie Minogue, of course.

But the carrot should be supplemented with the stick: That is, vaccine passports and no entry without one.

The post Alan Kohler: We need to talk about mandatory vaccination appeared first on The New Daily.

Be the first to comment on "Alan Kohler: We need to talk about mandatory vaccination"