Global petrol prices are falling, but Australian motorists are unlikely to see the full benefit due to complex pricing cycles.

The OPEC+ oil cartel agreed to ramp up production in a move that is expected to force down prices for motorists all over the world.

But in Sydney, Melbourne and Brisbane, drivers will likely be paying more for petrol in two weeks’ time than they are today.

It all comes down to Australia’s petrol pricing cycles – periods of fluctuating prices that vary across capital cities and range in duration from a low of 13 days to a high of 38.

It’s all legal, and it means that while motorists in Darwin, Hobart and Canberra will see prices fall from near record highs over coming weeks, those living in capital cities with petrol price cycles can expect higher costs.

“Prices take weeks to fall – often it happens at less than one cent a day,” NRMA spokesperson Peter Khoury told The New Daily on Thursday.

“[But prices] take hours to spike, and often it happens overnight.”

That means Australians are exposed to the highest prices for longer than they are the lowest prices.

And Mr Khoury said Australia was the only place in the world where motorists had to put up with this. 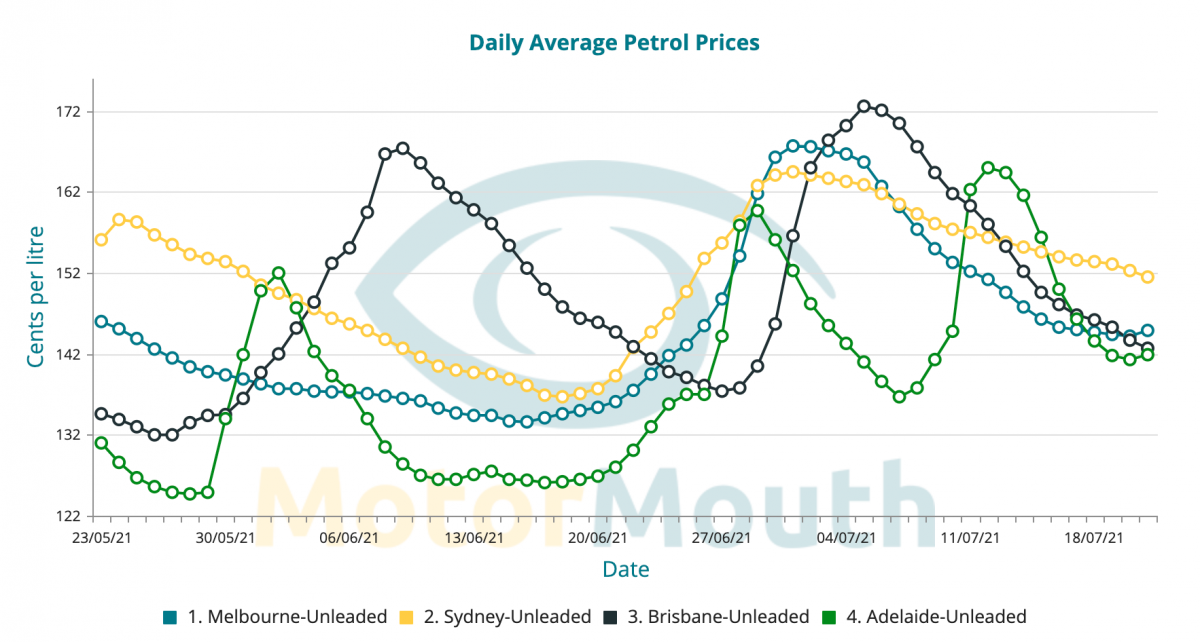 It has been this way for years, and short of using a fuel price app to locate the cheapest available prices, there’s nothing motorists can do about it.

It’s worth noting, though, that the fall in global oil prices will lead to lower peak and trough prices in Australia’s petrol price cycles.

But Australia’s petrol retailers are nonetheless facing questions over why they choose not to charge consumers stable prices.

“They would only invest the effort if it gave them a gain,” he told TND.

“It’s to increase their profits. There’s no other rational explanation.”

Mr Trotter also has no confidence that retailers will ever pass on the full benefit of lower global oil prices to Australian motorists.

“They’re more likely to put the price up when oil prices rise than they are to lower the price when the oil price comes down,” he said.

Previous research by the ACCC found that major chains like Coles Express drive the price cycles and are more expensive than independents on average.

The average gap between the cheapest and most expensive stations last year widened by 26 per cent to 11.4 cents a litre, according to the consumer watchdog.

It means motorists in Sydney could save $445 a year by filling up at the lowest price stations and those in Melbourne could save up to $317.

About 20 per cent of motorists use price tracking apps to access these savings but advocates fear everyone else cops the difference.

ACCC chair Rod Sims has been following the issue for years and has taken action against retailers that have engaged in price gouging.

But he told The New Daily that more stringent regulation to tackle the price cycles could backfire.

“More people buy on the low days than buy on the high days,” he said.

“[So], if you squash the cycle, do you just get the average price that you’re getting now anyway?

“[And then you would be] disadvantaging those who do buy when the price is low, because it matters to them.”

That said, Mr Sims said he recognised it was an important issue given prices were known to go up by as much as 30 cents a litre in just two days.

Mr Khoury went even further and said stringent price regulation could curtail competition and push up overall prices as a result.

Instead, he said the priority should be on ensuring retailers are forced to publish their real-time prices, so that groups like the NRMA and FuelTrac can publish accurate pricing data to help consumers shop around.

He said “where we encourage competition we see prices come down”.

But Mr Trotter took a different tack, telling The New Daily a price ceiling was needed to keep a lid on prices in a similar fashion to the Default Market Offer in the energy market.

The DMO limits how much energy retailers can charge.

“For those people who might miss out … guess what? They won’t have to pay the peak either,” Mr Trotter said.

“This doesn’t happen anywhere else [in the world].

“There’s a direct relationship in overseas countries between the price of oil … and the bowser.

“It should be a pretty simple calculation.”

The post Why Australian motorists could miss out on falling global petrol prices appeared first on The New Daily.