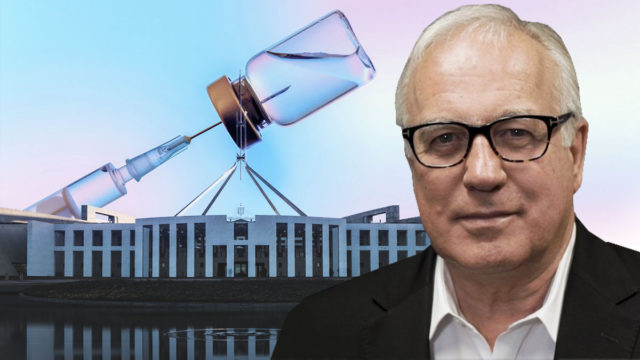 The real cause of Australia’s vaccination delays is that the government didn’t think there was any need to hurry because nobody was dying.

That was revealed by the secretary of the Health Department, Brendan Murphy, in an interview with Leigh Sales on the ABC’s 7.30 on Tuesday.

“We have always taken the view that unlike just about every other country in the world, we didn’t have the need for Emergency Use Authorisation and rapid approval processes, to get access to vaccines earlier,” he said.

“We went through our normal proper TGA approval processes and until they were completed, we couldn’t get access to vaccines – no company would distribute those vaccines.”

That’s the first time anyone has admitted the government itself is behind the delays.

Even on that same day Prime Minister Scott Morrison said the problem was that 3.1 million doses had not been delivered from overseas: “Supply is the major restraint and always has been, whether it’s been the non-delivery of vaccines from overseas, some three million that we were relying upon, and we all are aware of the situation in Europe and other places that has frustrated that supply.”

That was immediately denied by the EU, and then next morning Mr Morrison doubled down on the 3.1 million missing doses, so it’s turned into a mystery story, going nowhere without an inquiry.

A mistake born of complacency

Anyway, Professor Murphy’s revelation clarified the fundamental issue: The Australian government decided to go through normal TGA approval processes rather than use emergency authorisation as other countries have done.

That was a mistake, born of complacency and over-confidence.

If a deadly global pandemic that caused the fastest, deepest recession in history is not an emergency, it’s hard to know what is.

It’s true that our vaccine failure arose from success, while other countries did it the other way around – failure first, success later.

The US and UK were hopelessly lax in controlling the virus, so that 682,000 people have died in those two countries.

In response to that horrible death toll, they both had to hit the accelerator on vaccination and issued emergency use authorisations as well as organising massive logistical exercises to distribute them.

As a result, 46 per cent of Britons and 32 per cent of Americans have now been vaccinated.

Australian states were tough on lockdowns and quarantine last year, so only 909 Australians have died. The equivalent of that number in the US would be 11,700, not 555,000.

The Morrison government was opposed to the elimination strategy to begin with and has now over-promised and under-delivered in its own task of organising vaccines, and is being pilloried mercilessly and universally as a result.

It has not been helped by fresh memories over the response to Parliamentary sexual assault and the failure to sack Andrew Laming, which meant Mr Morrison has lost the benefit of the doubt for a while.

So while the state premiers have been seen to make decisions that are against their own political interests, but were the right thing to do for their citizens’ health, the federal government is perceived to be making political decisions, spinning them and then under-delivering on health.

The criticism is not entirely fair: I’ve been reading back over Scott Morrison’s press conferences last year and he was always careful to say that vaccines would be rolled out when they were approved by the authorities.

He did say we would be at the front of the queue and that he expected four million people to get their first dose by the end of March, but the statements were hedged with the proviso the vaccines had to be approved first, and available, but as he well knows, hedging like that always gets lost.

And in any case, as we have learnt from Brendan Murphy, the government had decided it wasn’t an emergency.

And of course, the TGA took its usual sweet time issuing provisional approvals, so the companies that owned the vaccines were not legally covered to ship them.

Also, a lot of the vaccines have been slow to arrive for various other reasons and CSL has been slower than everyone had hoped to gear up its manufacturing.

On top of that, the distribution through GPs is under fire as well, mainly because some doctors are complaining about not getting enough doses, but also because the government seemed to be dreaming about how many vaccinations the doctors could do.

Initially, the plan was to have 1000 GP practices do the work. My local practice is doing 10 per day, partly because they have other patients to deal with – doctors aren’t sitting around with nothing to do.

At that rate, it would take eight years to give the Australian adult population two doses each. The number of GPs doing vaccinations has increased to 1500, and will soon go to 4500.

In fact, all 8100 Australian GP practices will probably have to be roped in, as well as some state-run vaccine hubs, and other distribution centres as well, just to get through the volume necessary for herd immunity fast enough – that is, once CSL has geared up to full production and the jabs are available.

This crisis too shall pass, but Scott Morrison is racking up black marks that will linger.

Alan Kohler writes for The New Daily twice a week. He is editor in chief of Eureka Report and finance presenter on ABC News

The post Alan Kohler: Complacency produces a dose of reality with painful delays appeared first on The New Daily.

Be the first to comment on "Alan Kohler: Complacency produces a dose of reality with painful delays"