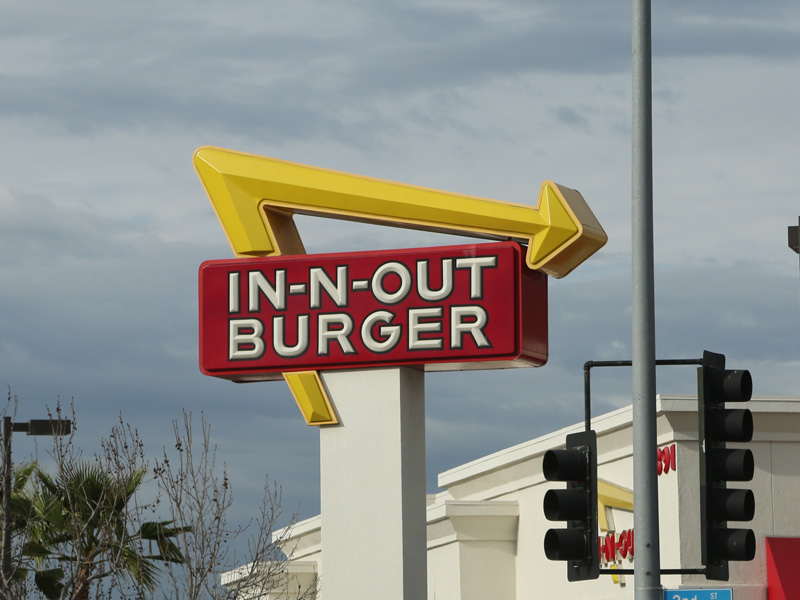 American fast food giant In-N-Out Burger has been somewhat of a tease Down Under, winning over the stomachs of Australian burger fiends with limited time offers that make its products scarce.

The chain, which counts some of America’s biggest celebrities as customers, drew massive crowds in Brisbane during its one-day store last year.

But despite its pop-up store success, we’ve barely heard a peep about any of the chain’s permanent expansion plans in Australia.

That might be because there aren’t any plans and perhaps never were.

Ms Murdoch, who works at EagleGate lawyers, told TND that In-N-Out must use its local trademark at least once every three years to prevent other businesses from adopting its brand in Australia.

“They’ve elected to do pop-up stores where you can buy their burgers for a limited time to create evidence of use for their trademark.”

The plan is working to devastating effect on businesses selling bootleg In-N-Out burgers Down Under.

On Thursday, In-N-Out Burger sued a local business, claiming its trademark was infringed on platforms UberEats and Menulog.

Lawyers for In-N-Out said the conduct was “misleading and deceptive”.

In-N-Out’s first claim to its Australian intellectual property referenced its pop-up stores in Australia, which have occurred periodically since 2012.

“In & out Aussie Burgers” was registered in May by business owner Puneet Ahori, who listed the restaurant on UberEats during COVID-19.

Mr Ahori also registered “IN-N-OUT AUSSIE BURGERS” and “Over & out burgers” with the Australian Business Register earlier this year.

The outlets are ‘dark kitchens’, meaning there are no dine-in locations.

It does, unlike In-N-Out Burger, regularly sell food in Australia though.

In-N-Out claimed Mr Ahori has no rights to the brand and has petitioned the court to order him to stop selling the burgers under that name.

It said the business is in “flagrant or wilful disregard” of In-N-Out’s rights, and has been “recklessly indifferent” to the US giant’s trademarks.

“The applicant [In-N-Out Burger] has suffered loss and damage and will, if the respondents are not permanently restrained, suffer further loss and damage,” lawyers for the US burger chain claimed in court filings.

In an interview with The New Daily on Friday, Mr Ahori denied infringing In-N-Out’s trademarks or misleading customers, claiming he did not know In-N-Out owned intellectual property in Australia.

He said his model is “totally different” because its a dark kitchen with no dine-in restaurant and a smaller menu.

“I created the business during COVID because my old restaurants were struggling and I was broke,” he said.

“I needed to do something different, or I’d have been down millions.”

Lawyers for In-N-Out contacted Mr Ahori several weeks ago asking him to deregister his business names before suing, but he declined.

Mr Ahori, who said he learned about the court case after The New Daily sent him questions on Friday, said he will defend the case himself.

“These guys are big, when you have the power and the money you can do what you want.”

Burger enthusiasts in Brisbane had been questioning whether In-N-Out was selling burgers on UberEats earlier this year, with one Reddit user highlighting the bootleg burger case in a popular /r/Brisbane thread.

“For those who thought it was an opportunity to try real In-N-Out Burger or that they actually finally bit the bullet and opened in Australia, nope, it’s Noodle Box [sic],” one user posted. For clarity, it isn’t Noodle Box.

The restaurant is still listed on UberEats platform and Menulog.

UberEats did not respond to a request for comment on Friday.

Ms Murdoch thinks the American giant will win the case, partly because adding “Aussie” to the end of “In-N-Out” doesn’t meet the bar for differentiation when a business is based in Australia to begin with.

It’s not the first time In-N-Out Burgers, which has more than 350 stores in the U.S., has sued a local business for allegedly using its intellectual property.

That case forced Hashtag to hand over everything it owned that had the “Down N’ Out” brand attached, despite In-N-Out not operating a single restaurant in Australia.

Be the first to comment on "Bootleg burgers: The real reason In-N-Out Burger keeps teasing Australians"