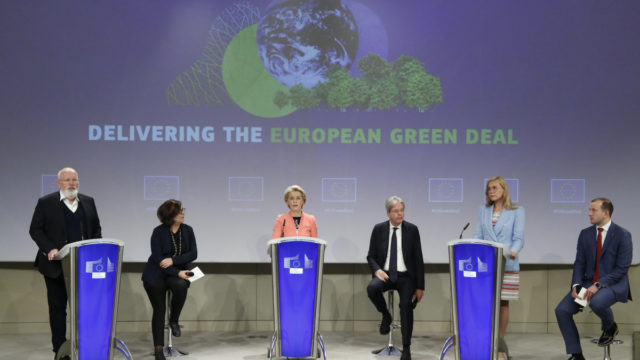 Carbon taxes are coming to Australia whether we like it or not.

They are coming despite the triumphant ‘axing of the tax’ in 2014.

They are coming despite the updated but equally loud ‘technology not taxes’ sloganeering from the Morrison government in 2021.

They are coming despite our government’s refusal to commit to a net-zero target.

This week the EU unveiled a suite of ambitious climate policies designed to confront climate change, meet an emissions reduction target of 55 per cent by 2030, and make the ‘European Green Deal’ a reality – transforming the 27-country bloc to a climate-neutral continent by 2050, while fostering prosperity and nurturing the natural world.

A key feature of this package is the gradual imposition of a carbon price on heavy-emitting basic industry in Europe.

However, the EU will also introduce a carbon border adjustment mechanism (CBAM) starting in 2026.

A rose by any other name …

The CBAM is essentially a tax on emissions-intensive imports to ensure a level playing field between greener, locally produced goods (that may be more expensive because of a domestic carbon price or cleaner technologies) and cheaper foreign goods from countries without carbon pricing.

The response to the prospect of CBAMs by the Australian government was outright rejection, with Trade Minister Dan Tehan labelling them protectionist and Scott Morrison signalling that he would be warning against ‘carbon tariffs’ at the G7 Summit in June.

Even after the CBAM details were unveiled, Deputy Primer Minister Barnaby Joyce on the ABC’s Insiders on Sunday incorrectly labelled the approach as a protectionist measure, “a carbon tariff, just a tariff… arbitrary tariff barriers”.

Despite our government’s chest beating, the EU’s CBAM proposal was handed to European governments last week with an eye to (and high likelihood of) ensuring compliance with world trade rules.

It will apply to cement, iron, steel, aluminium, fertilisers and electricity, and the most exposed are Russia, Turkey, China and the UK.

Companies exporting to Europe will have to pay for the emissions embedded in these products unless they have an equivalent carbon price, as the UK is likely to have.

Although the proposal is yet to be enacted, it is expected to be approved without major change by the EU Parliament and Council.

The Australian Industry Group, Australia’s peak industry association, says that the proposal is not protectionist like a tariff and is urging the Australian government to engage with the EU.

A tariff protects local goods by making imports more expensive. A CBAM applies the same tax on local goods and imports. It evens the playing field.

While the impact of EU’s CBAM proposal on Australia will be modest (given the low level of trade between the two), this is only the beginning of what is likely to become a global trend, particularly with our larger trading partners.

Domestic economies will suffer trying to reach net-zero emissions if free passes are given to carbon-intensive goods from countries without carbon pricing.

CBAMs avoid companies relocating to countries with no pollution limits and shipping those goods back to their original countries, known as carbon leakage.

The proposed CBAM will allow the EU to achieve such reductions without the risk of carbon leakage. Far from trade protection, this is about climate protection.

Other countries will likely follow now that the EU has taken the lead in drafting the first CBAM proposal.

The US Senate Democrats have now put forward a “polluter importer fee” and Japan, which recently dramatically increased its climate target, is reportedly also considering a similar proposal.

Both of these would increase the likelihood of a tax being imposed on a larger portion of Australian exports.

Indeed, at the G7 summit, leaders agreed to work to address the risk of carbon leakage and to align trading practices with their commitments under the Paris Agreement.

Soon Australia will no longer receive a free pass to export our carbon-intensive goods. How many countries do we want to be taxed by before we clean up our act?

Although only 1 per cent will be directly impacted by the EU’s CBAM, a significant amount of our emissions-intensive exports go to Japan, South Korea, the US and other high-income countries considering implementing their CBAM policies.

But with a change in climate policy, Australia could benefit from the adoption of CBAMs by customer countries.

Carbon border adjustments in destination markets can assist their development by levelling the playing field with high-emission competitors with unpriced carbon.

Instead of shouting from the sidelines, Australia would be well placed to engage constructively in global CBAM discussions while implementing domestic climate policies that seriously foster clean exports.

To do otherwise would seriously compromise the future of our manufacturing industries, damage our relationships with key allies and send revenue overseas.

The post Coming soon: The carbon taxes that cannot be repealed appeared first on The New Daily.

Be the first to comment on "Coming soon: The carbon taxes that cannot be repealed"