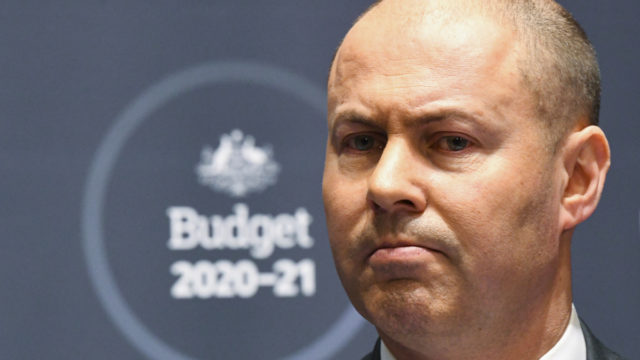 Here’s a good line for the office water cooler: The federal government will spend about the same amount of income servicing its debt this financial year as it did the year before, and even less than the year before that, despite spending hundreds of billions of dollars helping Australians weather the pandemic.

There is no trickery at play here. The explanation is simple.

Interest rates have fallen to record lows – meaning the government has to pay less to borrow the same amount.

It’s a good nugget of information to have in your back pocket for when someone talks about younger Australians being condemned to a lifetime of paying off government debt – and one that figured prominently in a Deloitte Access Economics report released on Monday.

Describing our economic defence against the virus as “cheap as chips”, the economic consultancy said the main implication of low debt servicing costs is “that the collapse in interest rates has given governments more room to move”. Or in other words: Spend big.

“Australia used that beautifully through COVID via spending on JobKeeper and the Coronavirus Supplement,” Deloitte Access Economics partner Chris Richardson wrote in the report.

“And we continue to have more space to move than most other nations.”

Mr Richardson said that was no ideological statement.

“It simply flows logically from the changed world in which we now live.”

So, what does this mean for the budget?

That the Treasurer has ample room to move in next week’s budget is an important point to make, given he has set a target of driving down unemployment below pre-pandemic levels and the Reserve Bank has little space to cut interest rates further.

The government has so far flagged extra funding for aged care and child care in the budget while committing to a revamp of skills and training.

But Deloitte says on top of “big dollars” for aged care and major tweaks to JobMaker, targeted support will be required to help otherwise viable businesses affected by ongoing restrictions survive the coming months.

“If the public policy risk is that otherwise viable businesses (and the jobs they support) are being pushed into closing by COVID-related events, then there’s a good reason to provide temporary support to tide families and businesses through the tough spot – indeed, that’s a reasonable description of JobKeeper,” the report says.

“Then again, the longer the crisis lasts (and it will clearly last some time longer yet for those whose livelihoods are connected to international borders), then the less the chance that businesses (and the jobs they support) will survive.”

Deloitte says the government should aim such policies at addressing problems rather than symptoms.

“For example, a lack of air travel is a symptom, so a program aimed at subsidising airfares on specific routes is a pretty blunt instrument to protect specific jobs,” the report says.

A better use of taxpayers’ money would be rolling out mini-versions of JobKeeper, as wage subsidies are normally a more efficient way of providing support to businesses that most need assistance.

Deloitte also added that while the Morrison government had presided over the first above-inflation increase in the nation’s unemployment benefit since 1994, “even with the additional $3.57 a day, the rate of JobSeeker still fails the fairness test – badly”.

“Had JobSeeker kept pace with wage growth over the last quarter of a century, then it would be $90 a week higher than the new rate,” the report says.

Deloitte says the direct cost of the $25-a-week increase would be $8 billion over the forward estimates, with much of that to be recovered through higher taxation and stronger economic growth as recipients go out and spend the extra cash on essentials.

“Previous work by Deloitte Access Economics for the Australian Council of Social Services shows that for every $3 spent on unemployment benefits, the eventual total net cost to the federal budget is only $1,” the report says.

“That’s because higher incomes for the unemployed are spent – which isn’t a surprise given that, as a group, they are the poorest Australians.”

When Treasurer Josh Frydenberg hands down the budget on May 11, Deloitte are expecting the following:

The post Economic defence against the virus was ‘cheap as chips’, says Deloitte appeared first on The New Daily.

Be the first to comment on "Economic defence against the virus was ‘cheap as chips’, says Deloitte"