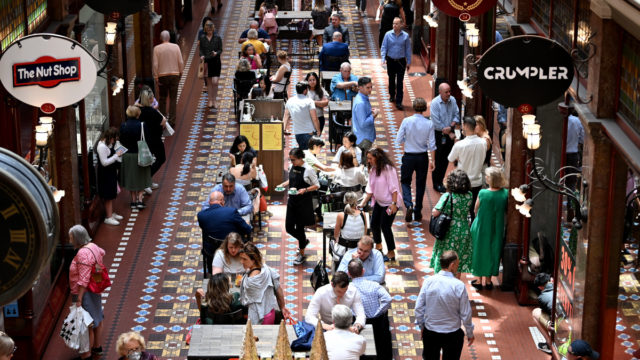 The Australian economy grew by 1.8 per cent in the March quarter to fully recover from last year’s steep recession and back to its pre-pandemic levels.

Economists’ forecasts had centred on a 1.5 per cent expansion for the first three months of the year following the above three per cent gains seen in both of the previous two quarters.

“With 1.8 per cent growth in the March quarter 2021, Australian economic activity has recovered to be above pre-pandemic levels and has grown 1.1 per cent through the year,” Australian Bureau of Statistics head of national accounts Michael Smedes said.

The national accounts released on Wednesday showed the main contributors to growth in the quarter were private business investment, dwelling investment and household spending.

“The rise in machinery and equipment investment was widespread and observed in both mining and non-mining industries,” Mr Smedes said.

Dwelling investment increased for the third consecutive quarter and was consistent with the recent surge in building approvals as households took advantage of the government’s HomeBuilder grants scheme.

The HomeBuilder scheme ended in March.

Household spending added 0.7 percentage points to growth in the quarter.

Spending on services rose 2.4 per cent as COVID-19 restrictions continued to ease around Australia, while spending on goods declined 0.5 per cent but remained above pre-pandemic levels.

BIS Oxford Economics chief economist Sarah Hunter said although the outlook is positive, the ongoing outbreak and lockdown in Victoria highlights the risk is still present.

“The recovery will not be on completely solid ground until the pandemic is sustainably under control – this outcome is contingent on the continued roll out of the vaccine both domestically and globally,” she said.

“Australians can’t bank on a first-rate recovery when their government is in the bottom-third of nations rolling out vaccines,” he said.

Just hours before the data release, Reserve Bank head of economic analysis Brad Jones also issued a note of caution in an address to the Minerals Week Australia-Asia Investment Outlook conference in Canberra.

“Here in Australia, it would seem premature to completely rule out the possibility of an overhang of cautious behaviour by households and firms, as seen internationally following previous shocks like the Great Depression and the GFC,” Dr Jones said.

Even so, he said the fact many Australian household and business balance sheets were in better condition than before the pandemic suggests the domestic economy could follow a quite different trajectory to past disasters.

“This is consistent with our central scenario for the Australian economy and the surprising strength in the domestic recovery to date,” he said.

The post Economy recovers to pre-pandemic levels appeared first on The New Daily.