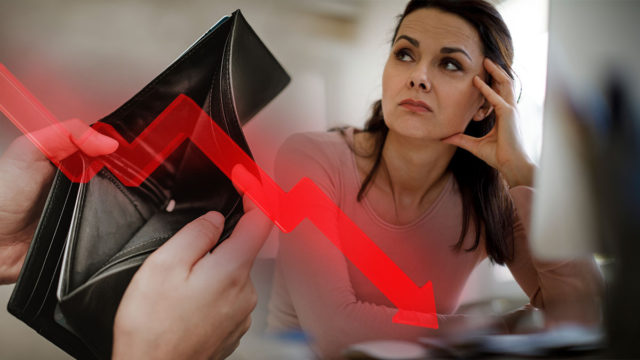 And on both counts, unfortunately, the outlook isn’t great.

It will probably be at least three years until workers see their pay packets growing and the economy starts really heating up again.

In the meantime, Dr Lowe and the RBA intend to use every policy lever at their disposal to hasten the recovery.

“Very significant monetary support will need to be maintained for some time to come,” he told the National Press Club on Wednesday.

“It is going to be some years before the goals for inflation and unemployment are achieved.”

Until those goals are reached, the headline interest rate will remain at 0.1 per cent. And, in the interim, the RBA will create another $100 billion to keep a lid on federal and state government “borrowing costs”.

They’re unprecedented decisions for Dr Lowe, but who could blame him? For working Australians, the RBA’s latest forecasts make for very sobering reading.

Unemployment – currently 6.6 per cent – will fall from the highest level in nearly two decades at about the same rate, and is expected to hit 5.25 per cent about halfway through 2023.

And because so many people will be looking for more hours or jobs, underlying inflation will stay below the RBA’s target of 2-3 per cent until 2024, according to the central bank. 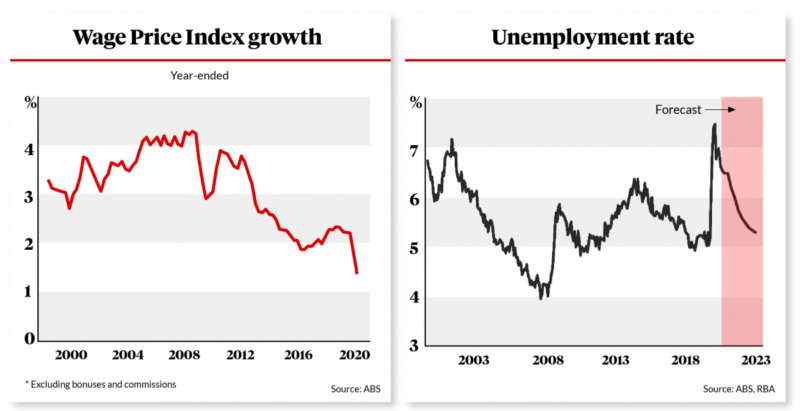 The good news is that the economic shock from COVID-19 could have been far worse in Australia.

But the RBA is under no illusions about the damage this sluggish trajectory could inflict, telling reporters on Wednesday that concern about rising asset prices and government debt paled in comparison.

Stagnation: The path to wages growth

So, how are we going to get there?

What the RBA wants is for more people to get jobs, which should lead to greater bargaining power and higher wages, in turn driving up prices (inflation) and economic growth.

But ironically Dr Lowe’s ability to boost the recovery is fairly limited.

That’s because interest rates are close to rock bottom and the RBA’s money-creation powers have already been put to use.

And there’s a much bigger issue. As UNSW economics professor Richard Holden explained, Australia’s economy was failing to deliver sustained wages growth even before the pandemic.

He was referring to a phenomenon known as secular stagnation, which broadly describes a set of structural issues across developed economies that’s suppressing growth in wages and output.

The symptoms are clear – real wages growth in Australia has been subdued for more than a decade – but the causes are more complicated.

Dr Lowe summed up the situation in his remarks on Wednesday, noting that even historically low unemployment before the pandemic didn’t drive wages upward.

Dr Lowe said ageing populations, globalisation and changes in the balance of power between workers and businesses were “really powerful structural factors” working against wages.

“You have to have a very tight labour market, low unemployment rates, to get wages increasing materially,” Dr Lowe said.

“Those structural factors are going to be with us for some years.”

Professor Holden said unemployment would need to fall much lower than the RBA and Treasury’s forecasts for wages to rise materially.

“If we don’t get unemployment below 4 per cent, it’s very hard to see wages growth getting back up into a good range,” he said.

Professor Holden said the missing link is the federal government, which is now looking to pull back on spending despite unemployment remaining high.

Treasury expects government spending will fall by $85 billion in 2021-22, as JobKeeper winds down and JobSeeker payments fall back to $40 a day.

In fact, the government is trying to repair the budget about as fast as the Abbott government in 2013, despite previously pledging to hold off until unemployment fell “comfortably below” 6 per cent.

“If we don’t have enough fiscal spending, we’re going to end up back in the same place, or potentially worse,” he said.

“They’re pulling money out of the economy … for largely political purposes rather than economic ones.”

EY Oceania chief economist Jo Masters took a different view, saying the economy was bouncing back and programs like JobKeeper had to end eventually.

“The economy doesn’t need it and it’s unsustainable,” she said.

Ms Masters told The New Daily the economy could deliver higher wages growth without large amounts of government spending, so long as the nation’s productivity improved.

Productivity basically measures how much workers produce for every dollar they’re paid, which in turn determines business income.

In Australia, productivity growth has languished below 3 per cent a year since the 2009 financial crisis.

Ms Masters said the government must adopt a broad-based reform agenda to address this – one that includes increasing the permanent rate of JobSeeker once the JobKeeper program ends in March.

“At some point you need to shift from respond and recover to recover and reform,” she said.

On this front, the government is looking to make minor changes to industrial relations law and pursue an overhaul of vocational training.

But he left the door open to permanently increasing the JobSeeker rate in March, a move which Dr Lowe supports.

“There’s a wide consensus in the community that the previous [JobSeeker] level should be increased permanently,” Dr Lowe said.

“I would join that consensus.”

The post Forget debt and housing prices. This is what the RBA is really worried about appeared first on The New Daily.

Be the first to comment on "Forget debt and housing prices. This is what the RBA is really worried about"