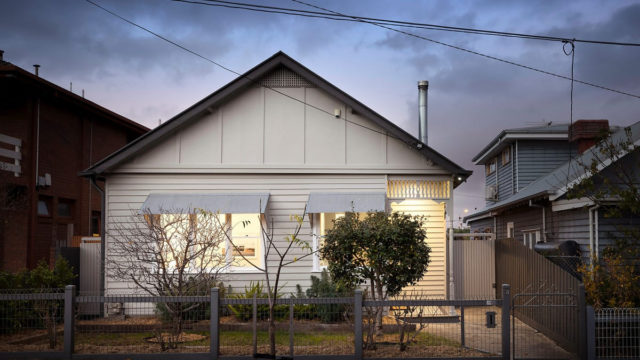 The average time it takes to save a house deposit in Australia’s capital cities has blown out to nine years as fresh data shows house prices are rising at the fastest rate on record.

Record-low interest rates have enabled buyers to take on larger mortgages and grants for home buyers have added to red-hot demand.

The Australian Bureau of Statistics revealed on Tuesday that average capital city property prices skyrocketed 6.7 per cent over the June quarter.

It was the fastest quarterly growth rate since the ABS started the data series in 2003.

Sydney and Canberra led the charge with price increases above 8 per cent during the quarter, while prices in Melbourne rose 6.1 per cent.

“Low levels of stock on the market were met with strong demand and properties transacting at an increasingly rapid rate,” Ms Marquardt said.

The fresh data came as Treasury and Reserve Bank officials appeared before a parliamentary inquiry into housing affordability on Tuesday morning.

Politicians and economists are concerned that the 16.8 per cent increase in average prices over the past year has worsened wealth inequality in Australia.

Housing wealth rose by an astonishing $596.4 billion over the June quarter, but about one in three Australians who own no property missed out on the extraordinary surge.

And the path to home ownership for those people is now much longer.

Treasury officials said Australians earning an average income must now save for nine years to afford a house deposit in a capital city and seven years in regional areas – three times longer than during the early 1990s.

They said a similar story had played out to varying degrees all over the country.

“Back in the early ’90s, you were looking at around two and a half [years] and now you’re looking at just over six [years],” she added, referring to economy-wide data.

The dwelling price to income ratio – a proxy for housing affordability – rose 7.4 per cent in the June quarter alone and is now at record levels.

Indeed APAC economist Callam Pickering said it takes 37 per cent longer to save for a house today than it did on average between 2003 and 2014.

“It’s never been harder to save for a deposit,” he told The New Daily.

“In recent years, first-home buyer activity has been reasonably strong, but the sort of price gains we’ve seen in recent quarters suggest that is not going to be the case much longer – people are going to get priced out.”

Kicking away the ladder

After rising to record levels during the pandemic, the proportion of new home lending to first-home buyers has started to decline in step with growing affordability constraints.

The value of first-home buyer loans fell from a high of $16.2 billion in January to $12.9 billion in July even as house prices rose, ABS data shows.

Investor loans rose from $6.5 billion to $9.3 billion per month over the same time frame.

The Morrison government has eased pressure on first-home buyers in the pandemic by pumping hundreds of millions of dollars into grants like HomeBuilder.

But Reserve Bank assistant governor Luci Ellis told the parliamentary hearing on Tuesday that these programs had also helped push up prices.

“Giving people more money to spend on housing, through whatever means, generally means that you bid up housing,” Dr Ellis said.

RBA: Housing supply not the culprit

Liberal MP Jason Falinski suggested house prices are rising due to an insufficient supply of property in Australia at the moment.

But Dr Ellis said a lack of housing supply was not the main cause of higher prices.

“Increasing supply does help, but it’s not a panacea – supply curves will always slope up,” she said.

Instead, RBA officials pointed to multiple factors, including interest rates and rising incomes across Australia, increasing the capacity to bid up prices at auction.

Lower interest rates make money cheaper so it becomes easier to afford a bigger mortgage, pushing up housing prices and the dollar value of deposits.

Dr Ellis said a move to lower interest rates was a “permanent shift” that has occurred around the world over the past four decades, as central banks sought to generate faster growth and lift inflation.

The post House prices are rising at record rates. This is how long it takes to save a deposit appeared first on The New Daily.

Be the first to comment on "House prices are rising at record rates. This is how long it takes to save a deposit"