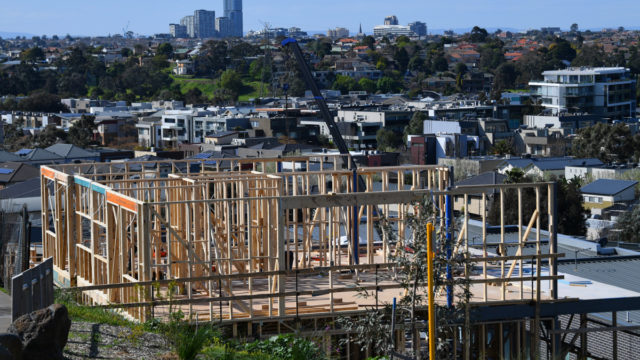 The official measure of consumer prices has risen by less than expected, with inflation of 0.6 per cent over the first three months of the year.

The ABS data show prices rose an average of just 1.1 per cent over the past year.

The quarterly reading was significantly below the 0.9 per cent tipped by economists.

Annual underlying measures of inflation, which smooth out wild price swings in the CPI and are a key guide to interest rate decisions, were equally subdued at an average 1.2 per cent.

This is considerably shy of what the Reserve Bank of Australia wants to see before it considers lifting the key cash rate from a record low 0.1 per cent.

A larger increase in prices could have seen the Reserve Bank roll back some of its stimulus measures earlier than expected, potentially putting upward pressure on mortgage interest rates.

However, despite reports of severe materials and labour shortages in some parts of the construction sector, price rises were totally offset by government grants.

Without the effect of the federal government’s HomeBuilder subsidy and various state grants, the ABS said home building costs would have jumped 1.9 per cent in the quarter.

The ABS says the cost increase of new dwelling purchase by owner-occupiers would have been much greater without government subsidies.

The official figures also fail to capture a very recent surge in rents across many parts of Australia, which is showing up in private figures, such as those from CoreLogic.

With the HomeBuilder scheme now closed for new applicants and rents back on the rise, economists expect some serious catch-up in inflation figures over the next couple of quarters.

RBA governor Philip Lowe has said he will not raise rates until annual core inflation returns sustainably within the 2-3 per cent target range – an event that it sees as unlikely until 2024.

The RBA does expect annual CPI to rise temporarily to around three per cent in the middle of this year as a result of the reversal of some pandemic-related price reductions.

However, underlying inflation was likely to remain below two per cent over both 2021 and 2022.