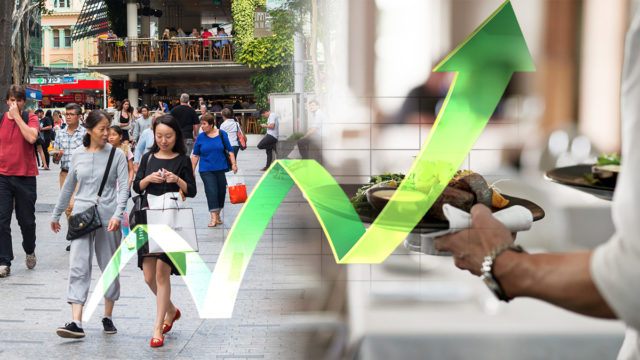 Treasury has upgraded its outlook for jobs on the back of a faster-than-expected recovery.

But economists at Commonwealth Bank say the forecasts are still too pessimistic, arguing that massive stimulus payments and forced savings due to lockdowns and border closures have delivered a major boost to household budgets.

Provided the ongoing COVID-19 outbreak in Sydney is successfully contained, they believe Australians will return to work much faster than the government’s official forecast.

Treasurer Josh Frydenberg handed down the upwardly revised set of economic forecasts as part of his Mid-Year Economic and Fiscal Outlook on Thursday.

An hour after, the ABS revealed Australians gained 90,000 more jobs than they lost in November, Mr Frydenberg told reporters in Canberra that the latest budget figures confirmed that “the Australian economy is rebounding strongly”.

The Treasurer noted that consumer and business confidence had risen to pre-crisis levels and roughly 85 per cent of the 1.3 million Australians who lost their job or were stood down on zero hours in April were now back at work.

As a result, he said, Treasury now expects the official unemployment rate to peak at 7.25 per cent in the March quarter of 2021 – down from a peak of 8 per cent forecast in the 2020-21 federal budget.

But the medium-term outlook remains dire.

Mr Frydenberg said Treasury does not expect the unemployment rate to return to pre-crisis levels (5.25 per cent) until mid-2024.

Though not everyone agrees.

“I look at the [ABS jobs] data that came out yesterday and employment growth is very, very strong, with the participation rate at its joint highest level on record. So there’s no evidence to suggest the unemployment rate will continue to rise,” Mr Aird told The New Daily.

The ABS report shows the national economy added 84,200 full-time and 5800 part-time jobs in November, while separate data from Commonwealth Bank shows households are cashed up and spending 12 per cent more on their debit and credit cards than this time last year.

Mr Aird said this is partly because more income is flowing into CBA bank accounts during the recession than it did before it. 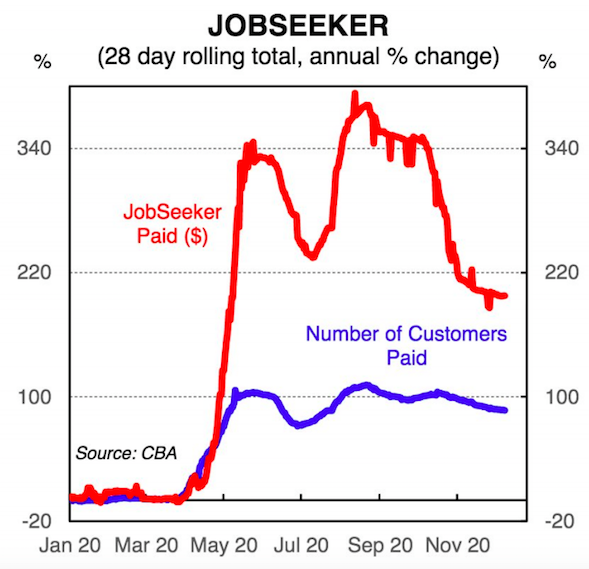 CBA’s data shows total income paid into customer bank accounts was up 10.5 per cent over the 12 months to December 11, with most of the extra income coming from government stimulus payments like JobKeeper and JobSeeker.

“And if households are spending more money, then businesses are going to need to employ more people,” he said.

Mr Aird said the outbreak in Sydney had the potential to slow down the recovery. But apart from that, he said, everything suggests “the recovery’s going to be stronger than what Treasury and the Reserve Bank have been forecasting”.

Asked if he was concerned about the withdrawal of JobKeeper in March, Mr Aird said he wasn’t, as businesses wouldn’t need a wage subsidy to pay staff if consumers kept spending like they are today. 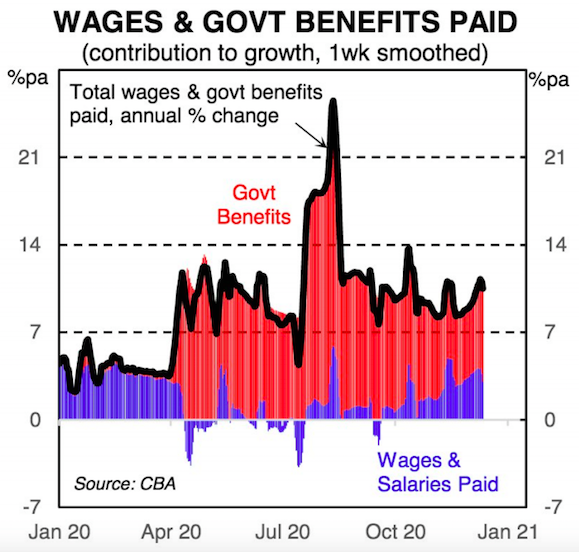 His colleague, CBA chief economist Stephen Halmarick, summed up the bank’s position in a separate research note released on Thursday.

“We expect economic growth next year to be supported by:

The post Jobs will come back faster than Treasury expects, says Commonwealth Bank appeared first on The New Daily.

Be the first to comment on "Jobs will come back faster than Treasury expects, says Commonwealth Bank"