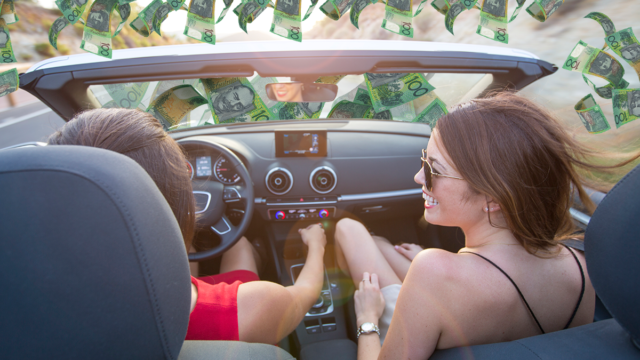 The holidaymaker was shocked after being quoted $1200 to rent a car for four days in Cairns recently. It usually costs $250.

“It was pretty shocking,” Ms Burgess told The New Daily.

“As soon as we saw that price, we were thinking about other options.”

The car rental market has gone a bit bonkers lately.

Prices skyrocketed after the COVID crash because rental companies sold off large swathes of their fleets during the pandemic, thinking they were about to go broke.

But that didn’t happen; in fact, quite the opposite did.

Demand surged as cooped-up Australians head out on holidays with government subsidies fattening up their wallets, leaving car rental companies without enough vehicles.

And as we all know, falling supply and rising demand is a recipe for price hikes.

It’s a story that’s playing out overseas, too.

Tourists in the United States resorted to hiring moving vans for beach holiday because rental cars were so scarce.

In Australia, the current rental car price in Cairns (a tourist hotspot) runs to a whopping $400 for three days, according to carrental.com.au data.

For many tourists, it has added insult to injury.

Large numbers have been denied refunds for cancelled trips while all Australians have battled against lockdowns and border closures.

And it’s not likely to improve any time soon, with a global computer chip shortage making it difficult for car companies to purchase new cars.

In the meantime, Australian tourists are getting creative.

Ms Burgess turned to car sharing on her trip – a move that saved her about $950 on the cost she was quoted for a rental car.

But there was a small snag. She had to pay an additional fee because she scratched the vehicle.

“Even with that, plus the total trip costs, it was still cheaper than renting a car,” Ms Burgess said.

Car sharing is basically an Uber-style version of the car rental industry, with cars owned by private citizens listed on digital platforms for short and long-term rental periods.

The practice has been going gangbusters as a result of the rental car shortage.

“We see we can play a much bigger part in longer-term car rentals and be more competitive with the car rental industry,” Mr Davies said.

Mr Gowing told The New Daily he’s making between $500 and $1000 a month on the vehicles as Australians unable to go overseas flock to Cairns for a holiday.

“I bought all the cars on Facebook Marketplace,” he said.

“I used my own money at the beginning, and then I started generating enough profit to buy more cars and built a fleet.”

Mr Gowing has even hired a dedicated car cleaner and mechanic to service the growing fleet, but is now being hit by new competitors.

“When I started I was pretty much the only person operating,” he said.

“My opportunity to grow isn’t so great now, because other people are stepping into the market.”

The post Milly was quoted $1200 for a four-day rental car. This is what she did instead appeared first on The New Daily.

Be the first to comment on "Milly was quoted $1200 for a four-day rental car. This is what she did instead"