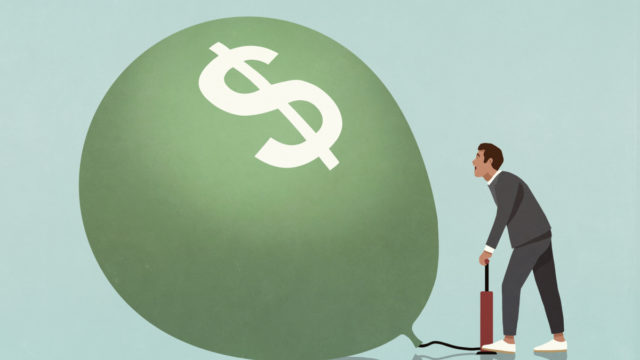 National Australia Bank has downplayed fears of an inflation outbreak as billions of dollars in government stimulus swirl around the economy – contradicting reports that the Reserve Bank could hike interest rates as early as next year.

Days before the RBA governor is due to give a speech on The Recovery, Investment and Monetary Policy, NAB economist Kaixin Owyong has released analysis showing inflation is unlikely to reach the RBA’s target band of 2-3 per cent until 2024 at the earliest.

The analysis predicts the Australian economy will take until at least 2022 to close the gap between its actual and potential output, and warns full employment is unlikely to be achieved for another two years after that.

“In our view, spare capacity is likely to be broadly worked through by the end of 2022. This makes it plausible that the unemployment gap is closed in 2023 and inflation returns to the target in 2024, given the usual lags between activity, unemployment and inflation,” Ms Owyong writes in the report.

“This accords with the RBA’s expectations [that] rates will be on hold at least until 2024, where it thinks it is highly unlikely [that] full employment and inflation at target will be achieved before then.” 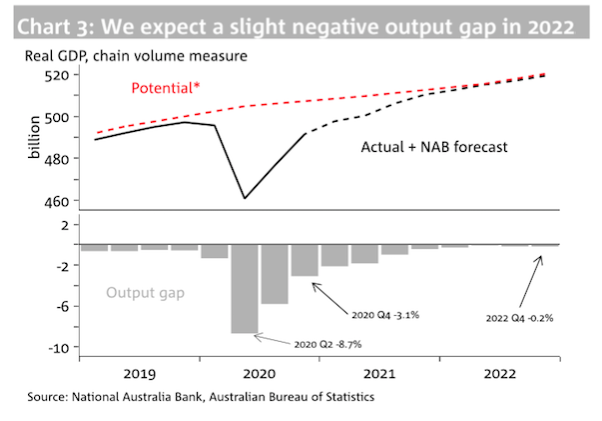 NAB arrived at its forecasts by upgrading its estimates of ‘full employment’ and ‘potential GDP growth’ in Australia – measures that Ms Owyong described as “crucial for central banks” in their efforts to keep economies running at optimal speed.

Potential GDP growth refers to the maximum rate of expansion that an economy could achieve if it was using its labour and resources to their fullest potential.

Meanwhile, in mainstream economics, full employment refers to the lowest rate of unemployment that an economy can sustain without triggering an outbreak of inflation due to rapid wage increases.

It is also known as the non-accelerating inflation rate of unemployment, or the NAIRU.

“At these levels, the economy is running neither too hot nor cold … and inflation should be sitting within the RBA’s 2-3 per cent target,” Ms Owyong writes.

The bank forecasts potential GDP growth to pick up to 1.9 per cent annually by FY23 and consequently expects the gap between the nation’s actual and potential economic output to close some time in 2022.

As for full employment, NAB estimates the NAIRU is now 4.9 per cent. 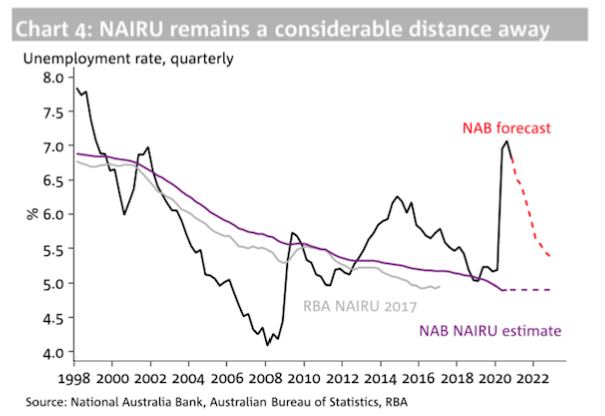 “This suggests that at the end of our forecast horizon, in Q4 2022, unemployment will still be 0.4 percentage points too high,” Ms Owyong writes.

Before the pandemic, the Reserve Bank estimated the NAIRU to be 4.5 per cent – well below the unemployment rate recorded by the ABS in January (6.4 per cent).

Centre for Independent Studies chief economist Peter Tulip, who worked for years within the research department of the RBA, said NAB’s NAIRU estimate was “more credible” than anything that had been published recently, including estimates by the RBA or government.

But he said their approach to estimating inflation expectations was “probably too high and I would put more weight on the very low [wage price index] readings we have been getting”.

“But these differences are not large and within the margin of error,” he said.

“The similarity of our estimates is more important than the difference: Unemployment will substantially exceed either estimate of the NAIRU for several years, so the policy implications are the same – we need more stimulus.” 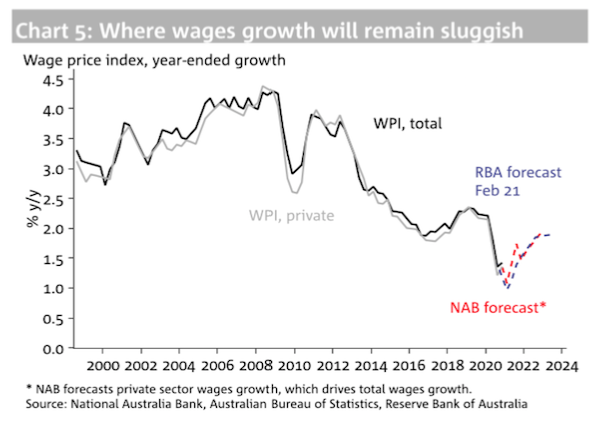 Wages grew by a record low of 1.4 per cent over the 12 months to December 31, according to the Australian Bureau of Statistics.

Meanwhile, in its Mid-Year Economic and Fiscal Outlook, the federal government forecast the unemployment rate to be at 5.25 per cent in mid-2024, well above what is required to lift wages and stabilise inflation.

“So, on their own figures, the government needs to increase its support for the economy, not wind it back,” said Dr Tulip, when asked about the stepping down of government support at the end of the month.

“With diminishing returns to extra spending, they should cut taxes aggressively.

“There is no reason why we are paying these high taxes at the moment – they are dampening spending and hurting the economy.”

University of Queensland economics professor John Quiggin said the NAIRU concept was “problematic” and the question of what level of unemployment would trigger inflation was “almost unanswerable”.

What is clear, he said, is that unemployment has been too high and inflation too low for years and more stimulus is needed.

But he said the government was unlikely to increase fiscal support as it was already wedded to expensive tax cuts and was shifting its attention to reducing the deficit.

“As it is, with a combination of having tax cuts legislated based on economic growth far higher than what we’ve had, and a desire not to let the budget deficit grow indefinitely, the government is in a really difficult position,” Professor Quiggin said.

“And the Reserve Bank, obviously, has been expressing lots of frustration about this for a long time.”