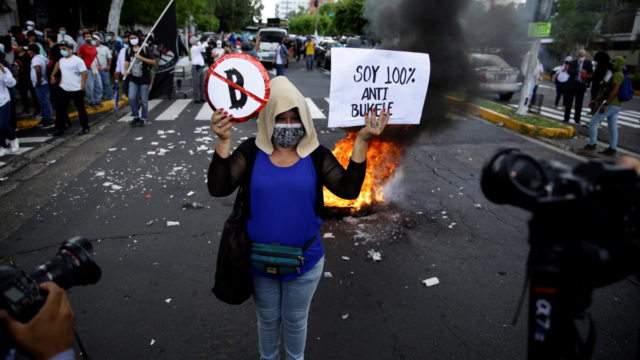 El Salvador’s experiment with Bitcoin has suffered a rocky start after the cryptocurrency tanked in value hours after becoming legal tender.

In a world first, the Central American nation enacted laws letting citizens pay their taxes in Bitcoin and forcing retailers to accept it as a payment.

Videos of residents using Bitcoin to buy Starbucks and McDonald’s were posted to social media after the government handed $US30 worth of the currency to everyone that downloaded its digital wallet called “Chivo”.

The laws are being closely watched around the world as other banks, including Australia’s Reserve Bank, experiment with digital currencies.

But the controversial plan, which has sparked protests across the nation in recent weeks, was immediately mired in further criticism after Bitcoin’s value plummeted 15 per cent within hours of the new system going live.

Soon afterwards, the government was forced to take its digital wallet offline as technical issues began to plague the system.

Some critics are now labelling the experiment “financial madness” amid warnings from the World Bank and International Monetary Fund.

He posted on Twitter that he was “buying the dip” – tagging the IMF.

University of Canberra lecturer and economist John Hawkins, who has been watching the experiment, said the extra investment was “reckless”.

“He’s not going to admit he’s made a mistake here,” Dr Hawkins said.

“If people took their President’s advice yesterday and put their money into Bitcoin, they’ve lost 10 per cent of it already.”

Can Bitcoin be used as a currency?

Mr Bukele is determined to make Bitcoin a currency, even as nations like the United States and Australia begin classifying it as an asset like gold.

Bitcoin is a decentralised currency running on a digital blockchain, which means there is no central bank or government controlling or issuing it.

Coins are instead traded as a series of digital codes with a limited supply. (You can read a useful explainer on Bitcoin here.)

Mr Bukele believes Bitcoin will give El Salvador, which has used the US dollar since 2001, more control over its monetary system.

But critics say Bitcoin’s instability shows El Salvadorans are actually losing control over their money to investors speculating on crypto.

It is also hoped citizens will be freed from paying hundreds of millions of dollars in international remittance fees.

Expatriates sending money back to the country from overseas accounts account for about 23 per cent of El Salvador’s annual GDP.

With Bitcoin, proponents argue, transferring this money will be free and independent of huge commercial banks like Western Union.

But critics, including scores of workers that have taken to the streets to protest against the move, say Bitcoin is too unstable to function as a currency.

One in three El Salvadorans also have no access to the internet, raising concerns many people can’t use the government’s digital wallet.

On Wednesday, just 24 hours after the new system went live, the risks associated with moving to Bitcoin became more apparent.

Mr Bukele was reduced to offering tech support to citizens on Twitter amid reports of outages and bugs plaguing his digital wallet system.

It came after the government was forced to temporarily suspend the wallet on Tuesday because its servers were unable to keep up with rising demand.

“Like all innovation, the #Bitcoin process in El Salvador has a learning curve,” a translated tweet from Mr Bukele on Wednesday reads.

“We must break the paradigms of the past, El Salvador has the right to advance towards the first world.”

Despite the issues, Mr Bukele is pressing ahead and hedging his bets by making a $US150 million ($203.5 million) trust that allows citizens to swap Bitcoin for US dollars without any fees at more than 200 ATMs across the nation.

It comes as the President faces accusations of authoritarianism after he purged the country’s judiciary of dissidents and targeted journalists.

Dr Hawkins is critical of Mr Bukele and said the latest fluctuations in the value of Bitcoin are unfortunately a sign of what’s to come for El Salvador.

He argued Bitcoin makes a poor currency because it doesn’t maintain a stable value, which is important because workers must buy essentials and send money overseas on a consistent and predictable basis.

“It’s a recipe for a lot of confusion, having two currencies circulating that fluctuate wildly against each other,” Dr Hawkins said.

“Rather than putting money into schools and hospitals, he’s gambling on a speculative asset like Bitcoin. The whole program isn’t thought out.”

Banks around the world are watching El Salvador’s experiment closely amid consideration about whether digital currencies can make financial systems more efficient and reduce the costs of moving money overseas.

Australia’s Reserve Bank is working with National Australia Bank and Commonwealth Bank to research the use case of a central bank digital currency (CBDC) within Australia’s financial system.

This currency would be very different to Bitcoin, however, and would be primarily used to improve transactions between banks, not customers.

Professor Ellie Rennie, an academic and blockchain expert at RMIT, said central banks in Australia and elsewhere are looking for ways to create digital currencies that aren’t plagued by instability like Bitcoin.

“There are different ways you can achieve that,” Professor Rennie said.

“One way is to have equivalent assets in a bank account – every time a digital token needs to be destroyed, the equivalent bank note is there.”

One prominent example of this has been an effort by Facebook to make a so-called “stable coin” called Diem, which could be an international  currency that does not constantly fluctuate in value.

The post ‘Reckless’: El Salvador doubles down on Bitcoin after price plummets appeared first on The New Daily.

Be the first to comment on "‘Reckless’: El Salvador doubles down on Bitcoin after price plummets"